Mission trips and child sponsorship at the Missions of Hope school in Gitathuru, Kenya, have led the West Valley Christian Church, West Hills, California, to an even bigger vision: purchasing property and renovating it for a new church plant in the Gitathuru community!

The church’s involvement with Gitathuru began in May 2017 with a CMF vision trip with a group of pastors that included Lead Pastor Rob Denton and Missions Pastor Greg Green from West Valley Christian.

“We toured the slums and then went to Gitathuru and saw the need there as God’s call, and sponsored children that day,” said Greg Green. “We returned home and did a child sponsorship event later that year and sponsored 97 kids from Gitathuru.”

West Valley has been supporting missionaries and mission groups for at least 40 years, but in the past 20 years has begun sending out teams to areas the church supports. A group trip of 10 from West Valley to Kenya in September 2018 greatly impacted them and led to the new vision of a church plant. 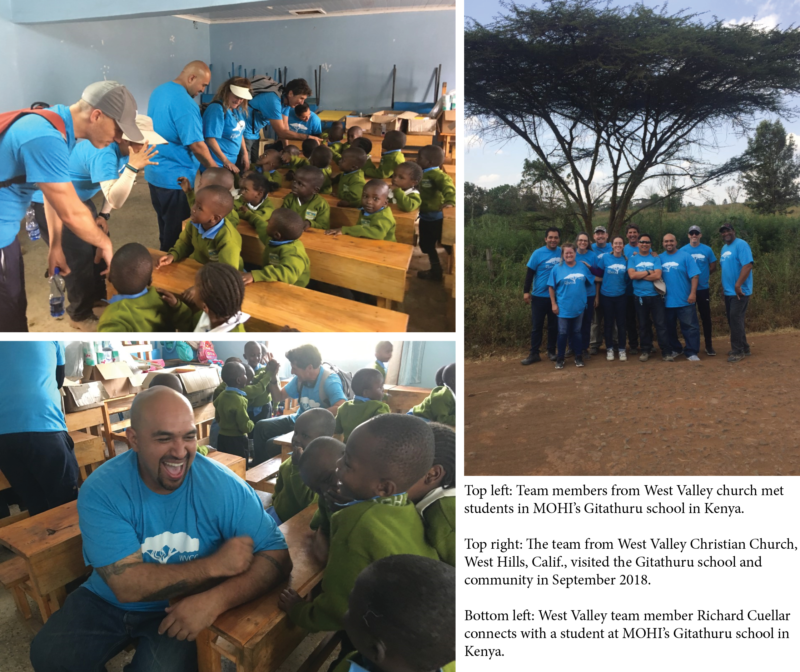 “The Gitathuru school is very full and we saw that the children in the school were being clothed, fed and taught the gospel,” said Greg. “But the parents in the community were still in need of Christ. Some attended a church that was teaching a health and wealth gospel. We could see how this message was clearly attractive to that area, but it cries out the need for a true gospel-preaching church.”

Greg returned to West Valley and he and Lead Pastor Rob Denton became convinced that starting a church in Gitathuru was part of the great need in that community. MOHI founders and directors Wallace and Mary Kamau were very excited by the opportunity.

“West Valley’s mission philosophy is to come alongside and partner with people who are invested in the lives of the communities they serve,” said Greg. “We saw the opportunity to enhance what was already being done by MOHI, using the school as a bridge to the community.”

At this time, West Valley has purchased property about 100 feet from the school (see photo at top) that has two connected structures that will be renovated to be used as a church.

“The goal is to have the church open by the end of the year,” said Greg. “A pastor has been found and is very excited about the opportunity. The budget for the building, furniture, fixtures and equipment, plus support for the pastor for the first year, is between $50,000 to $60,000, and will come from our mission budget and funds we raise as needed going forward.”

The people of West Valley rallied around the idea of child sponsorship from the very beginning and developed a strong connection to the Gitathuru children and community.

“Sponsorship created a strong awareness to needs in Gitathuru and built a deeper level of understanding and compassion for the families,” said Greg.

“We have been incredibly impressed with both MOHI and CMF and are very happy to partner with them,” he added. “The child sponsorship program is an amazing process to show both God’s power and the need for it throughout the world.”