If you were looking for a perfect example of the success of the Disciple Making Movement method used by CMF missionaries in Kenya, Eric Pitts would nominate his Kenyan friend and co-worker, Jackson Emaniman.

“Our partnership with the local Community Christian Church (CCC) is responsible for reaching many, including Jackson,” said Eric. “Jackson began attending church in 2019 when CCC leaders planted a church in Kaamase, his village. Even as a new believer he felt called to know more about God and study His Word.”

Jackson was later introduced to the Discovery Bible Study (DBS) method when a Turkana-led training was held in the riverbed near his home.

“The training inspired him to begin a Bible study with his family and he has been faithfully leading it ever since,” said Eric. 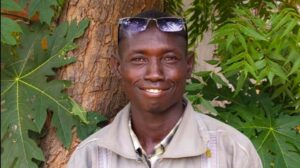 And that was just the beginning of Jackson’s journey! Eric noticed his potential and began one-on-one coaching with Jackson.

“Jackson is very high energy and has been faithful in everything he has taken on,” said Eric. “Not only is he attending the Turkana Bible Training Institute to become a pastor, but he has also planted DBS groups at the CMF farms near his home and continues to do outreach in his community. He facilitates four DBS weekly groups and has helped two others start groups of their own, creating a second generation of disciples in his village.”

Jackson’s ministries serve to perfectly illustrate the cycle of church planting that’s at the core of the DMM methods.

“Jackson’s church was planted by a local pastor who was trained in DMM and DBS by CMF missionaries, and now he is making disciples in his community using the same methods that helped reach his area,” said Eric. “Due to the church planted in his village, there are now multiple irrigated farms developed by the CMF farm ministry in his village, also. The farms and the Bible studies are a catalyst for transformation in the entire area!”

“We praise God for Jackson’s faithfulness and the evidence of so much amazing growth and change in such a short time,” added Eric.