Tony Cole grew up in the northwest U.S. and planned to serve God by planting churches there after graduating from Boise Bible College, but his life took a different path. He was in the CMF home office recently and shared his thoughtful and engaging perspectives about his past five years as a Globalscope campus minister and what it’s like living in the beautiful university town of Tübingen, Germany.

What led you to a career in campus ministry?

“After I graduated from BBC, I went on to get my M.Div. degree from Lincoln Christian University. I spent a lot of time in prayer and fasting, and it became clear to me that returning to the northwest as I’d always intended wasn’t in God’s plan for me then. In conversations with a mentor, he shared that he saw me as “a geek of all trades,” by which he meant that he had noticed that I had all kinds of friends in college and enjoyed getting to know different kinds of people well. He thought I was a good fit for campus ministry. I had spent a summer in East Africa and met several CMF missionaries there. When I learned about Globalscope with CMF, it seemed like that’s where God was leading me. Since I’m pretty good with languages, I picked the Unterwegs ministry team in Tübingen.”

“I like the people. Germans aren’t interested in small talk. They like to have good, intense conversations. You don’t have to wonder what people think about things – they will tell you! 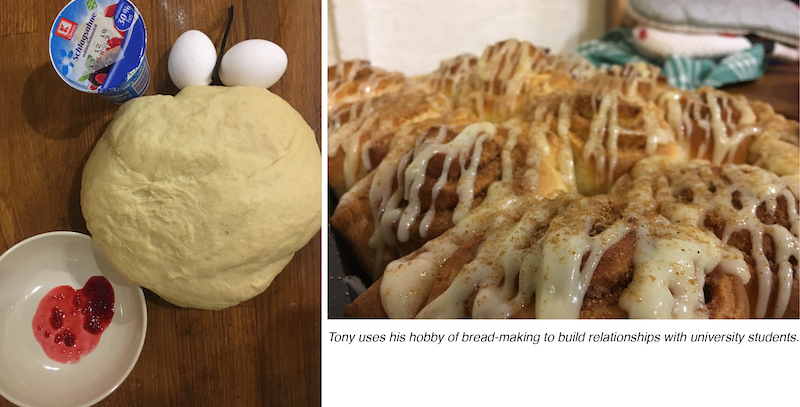 I also love the bakeries, the delicious, fresh breads and the beautiful scenery. I live on the fifth floor of a 120-year old building and can look out my window and see the local castle and the university campus. After five years there I have a lot of friends and, while I’m not considered a local, I’m thought of as ‘an accepted foreigner.’ “

What are the best parts of your work at Unterwegs?

“I love the creativity of interpreting the gospel for people who don’t understand it. It requires constant rethinking of how to put things in accessible language that the students can understand. I also love the freedom to connect with students in everyday activities. Our ministry isn’t just about programs. I get to hang out with students while hiking or baking bread together. That’s when the breakthrough stuff happens.”

What are the hardest parts of your work?

“There is a tremendous weight of skepticism that we deal with every day. People frequently reject you if you say you’re a Christian. This intense resistance is isolating. I have to gently and persistently explain that I’m not a cult leader.

“I have been called to love people who believe differently and create a safe space for the marginalized. I have to respect people’s differences and meet them where they are and get to know their stories. This isn’t always easy. Our ministry has people who are living at all points on the social and political spectrum. I have to not only learn to love them, but also gently model that acceptance so they will treat one another with respect. Jesus is my model in this. He had a whole range of different types of people in His community and I have learned from how He managed them.”

How do European/German college students differ from U.S. college kids?

“They are quite similar, for the most part. Since Germans are from a smaller country, they have a much larger view of the world. Most speak three to five languages. They know what’s going on in the world in a bigger way, not just what’s happening in their country. But like most college students, they are under stress and trying to figure out their identity, the meaning of life, and what their family will look like going forward.”

Campus ministry sounds exhausting! Why do you keep doing it?

“The work is enriching and there’s always more to do! It’s also very creative; I’m always growing and developing. There are 30,000 new students in Tübingen every four years. I could stay there the rest of my life and constantly meet new world-changers!”